A variable is something a researcher is trying to measure, and it can be just about anything, including objects, amounts of time, feelings, or events.  Researchers in the field of nutrition might measure variables such as lab values, weights, effects of a medication, athletic performance, and so on.

There are two key variables in every experiment:

Example 1:  The researcher wants to determine the ergogenic effects of caffeine on baseball players’ performance.

Example 2:  The researcher wants to evaluate the amount of weight lost by the group on average based on various levels of calorie reduction.

Example 4:  A farmer wants to know which type of fertilizer helps his plants grow the fastest.

Taking the first example above on testing the effects of caffeine on athletic performance, one constant variable might be the players’ diets.  We would want to make this constant for all.  Maybe they would all follow the same macronutrient distribution or all would eat the same foods provided in the meal halls.  This should be constant among the athletes because if one athlete consumes higher levels of carbohydrates (carbohydrate loads), his performance may be better than his teammates because of his improved diet.  Another constant is ensuring each athlete is well-hydrated.  If an athlete were dehydrated, his performance may be worse off than adequately-hydrated athletes.  In both cases, these should be made constant so we know the performance effects were not due to a superior diet or from dehydration, which could skew results. 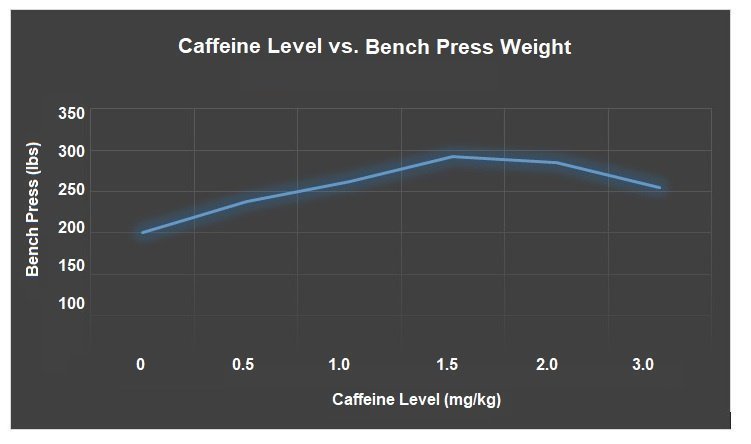 In the image above, you can see a sample chart for a study on caffeine levels and the effects on bench press in athletes.  The caffeine level (the independent variable) is listed on the x-axis, and the bench press weight (the dependent variable) is listed on the y-axis.  This chart illustrates as the level of caffeine goes up, the athlete’s bench press weight also increases, but that this seems to peak at 1.5 mg caffeine per kilogram of bodyweight and then begins to decrease.  Please note, this is only a made-up chart and not real data.