Add study modules and features to your Study Suite Software!

Get more out of studying!

IMPORTANT: This page is intended only for customers who already have the Study Suite program installed and are running the Dietitian Exam Study Suite version 8.0.0 or later or the Diet Tech Exam Study Suite 6.0.0 or later (purchased after November 2021). Study Suite programs prior to these versions must be updated before the study modules on this page may be added. If you see Library, Flash Cards, Hanging with Nutrition, Study Partner, and Study Sessions in your software, then you have an appropriate version.

What Happens After I Purchase An Add-On Product? 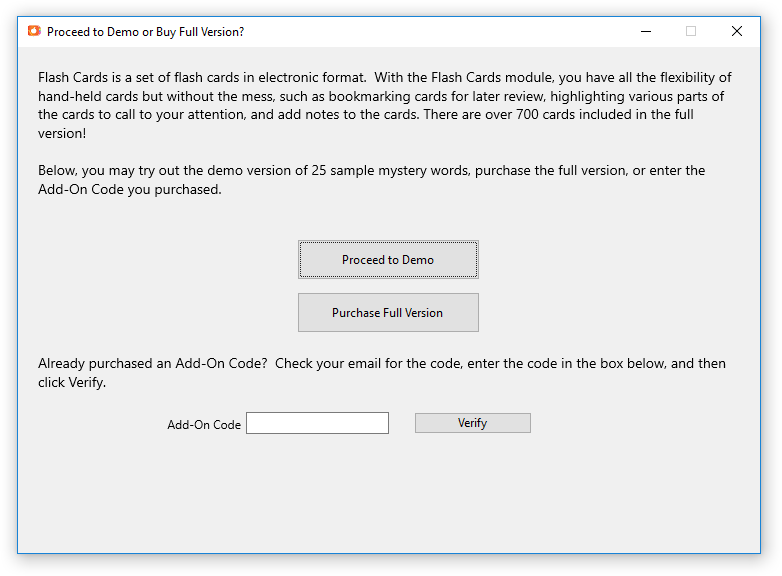 Library is a list of searchable topics and articles to read prior to studying in the software. Library is included in the Plus and Ultimate packages and may be added on in the Basic package.

Hanging with Nutrition is a hangman-style game familiarizing nutrition students with the vocabulary of the profession. Instead of just “blind guessing” the word, the student is presented with a clue to help solve the secret word. This add-on is included in the Ultimate package and may be added on in the Basic and Plus packages.

Flash Cards is a set of flash cards in electronic format. With the Flash Cards module, you have all the flexibility of hand-held cards but without the mess, such as bookmarking cards for later review and adding notes to the cards.  Over 1,100 flash cards included in the Dietitian Exam Study Suite (over 800 in Diet Tech)! Flash Cards is included in the Ultimate package and may be added on in the Basic and Plus packages.

Just like hard copies of flash cards, with the electronic version, you can also:

And unlike hard copies of flash cards, with the electronic version you can also:

Study Sessions is a unique feature which builds a study plan just for you. Choose an exam date or from a pre-defined set number of months to study, choose the days of the week you plan on studying, and Study Sessions generates your study plan. Each day you enter the software, you will be presented with the day’s topics to cover as well as all of the different study modules which contain these topics. You can even work ahead or revisit past sessions. Study Sessions is included in the Ultimate package and may be added on in the Basic and Plus packages.

Don't Have the Study Suite Installed?